What is Reasonable Suspicion Testing?

When employees are impaired at work, it poses a safety risk to themselves and those around them. Employees who abuse drugs are more than three and a half times as likely to have an accident on the job, and five times more likely to have an off-the-job accident that impacts their workplace performance.

Federal agencies’ standards for reasonable suspicions define it as testing based on specific, contemporaneous, articulable observations concerning the appearance, behavior, speech, or body odors of the employee. This means that there must be documentation that observed behaviors or symptoms have led to a reasonable belief that an employee is under the influence. It is important to note however, that for non-regulated employees, each state does have its own set of rules regarding random drug testing in general. 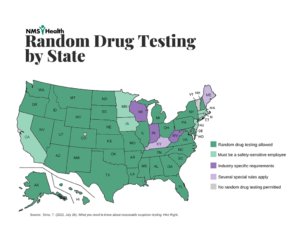 Many states have followed the example set by the federal government like Alabama, Kentucky, Minnesota, and Mississippi, while others like Georgia, Ohio, and Nevada don’t not mention reasonable suspicion standards at all in their statutes. Despite this, employers in these states do not have carte blanche to test their employees whenever they feel like it. Employers and supervisors should continue to use commonsense, and individualized suspicion as the basis for their standards.

What could trigger a reasonable suspicion?

When an employee is suspected of being under the influence at work, observation needs to be made by a supervisor immediately. While they do not have to be experts in substance abuse, managers, supervisors, and HR professionals should receive appropriate training to identify some of the most common symptoms of impairment.

Symptoms can be present physically or behaviorally. Physical symptoms may be things like loss of coordination, slowed or slurred speech, and profuse sweating whereas behavioral symptoms could present as things like increased talkativeness, anxiety, or paranoia. 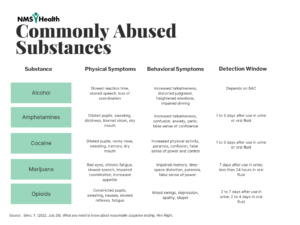 Additionally, beyond the textbook symptoms of drug and alcohol use, employers and supervisors should be looking for behaviors that are out of the ordinary for that particular employee. If an employee who is typically known to be prompt and timely begins to habitually show up late or a typically upbeat employee is becoming more and more erratic in their moods, that might be a sign that there is something going on.

Once a comprehensive drug and alcohol testing policy is in place which accounts for reasonable suspicion testing, employers should establish a documentation process that is used consistently with each reasonable suspicion case. Creating, or utilizing a standardized observation worksheet or template is an easy way to ensure that each case is being handled uniformly.

When an employee or supervisor voices a concern or a complaint, the process should be initiated. Managers, or HR professionals should go over the complaint, ask about what was observed, and who witnessed it. Once this complaint is documented, firsthand observation should be made my at least two members of management, preferably the employee’s supervisor and a member of the HR team.  Each person should observe the employee independently. If the employee is in a safety-sensitive position such as operating heavy equipment, working near machinery, or in a way that appears to be a safety concern, they should be removed from the work area immediately. They can be asked to move to another area, such as a conference room or lunchroom, where observation can be made safely.

After the employee has been observed, both observers should document what they saw, including any unusual behaviors and symptoms. The observations should be as specific and detailed as possible so that managers and employers can determine what the next steps should be. If it is decided that the company wants to move forward and reasonable suspicion testing is warranted, management and HR professionals should meet with the employee to explain what has been documented and why a drug test is needed. If the employee is to go to a testing site, it is important to arrange for transportation as they may be under the influence and their driving could be impaired.

Company policy should have clear guidelines for what employees can expect after providing their drug test specimen as well. Typically, employers will not have the employee return to work while awaiting the test results. While employers are not obligated to pay nonexempt employees for any time away from work while results are pending, they may be required to pay exempt employees for this time according to the Fair Labor Standards Act. In the case of a negative result, some employers will pay the employee for any hours missed while waiting for the test results.

The idea of taking an already written workplace drug and alcohol policy, like the DOT standard for example, and applying it to a different workforce might be tempting when employers are instituting their own policies. However, it can lead to serious issues. The DOT regulations apply to a very specific group of people, and other companies may operate in different states, and industries. There are a lot of variation state to state when it comes to drug testing. Some jurisdictions go as far as to regulate which specimens can be tested and how employees are notified of test results. As some state and local laws allow wronged employees to sue their employers for violating their privacy rights, it is important to be knowledgeable and up to date on any pertinent laws and regulations.

With reasonable suspicion testing employers are trying to determine if an employee was under the influence of substances while at work so time is of the essence. Alcohol, and some drugs, can be metabolized by the body very quickly. In many cases, evidence of substance use that violates company policy can be gone in 24 to 48 hours. While it is important to document reasonable suspicion, and go through the appropriate steps, the longer it takes to test the employee the higher the likelihood is that they will test negative even if they were under the influence when the first suspicion occurred.

It is obviously not a comfortable conversation, for either party, to have when there is a suspicion of an employee being under the influence. Employees may offer up excuses to explain away their behaviors or symptoms, chalking it up to a hangover, a restless night, or a personal issue at home. Employers may want to take their employee at their word and decide that whatever the excuse is, it sufficiently explains away the issue. However, if there is enough evidence to warrant suspicion and testing has been determined to be needed, then the testing should occur regardless.

Having a refusal to test clause in a company drug testing policy is important because it establishes expectations and consequences for employees do not want to participate in reasonable suspicion testing. It also provides documentation of the company’s policy should the employee claim that they were wrongfully terminated or reprimanded. The refusal to test policy should include a comprehensive explanation of what is considered a refusal. This can include scenarios such as refusal to submit to testing at any point in the process, refusal to provide a specimen, attempting to adulterate or substitute a specimen, and failing to provide an appropriate and adequate medical explanation, among other things.

Reasonable suspicion testing can be a challenging component of a workplace drug testing program and requires time and commitment to get it right. Instituting these policies can have a positive impact on the overall health and safety of company

SHRM. (2022, April 4). What might be considered reasonable suspicion for drug testing? SHRM. Retrieved August 1, 2022, from https://www.shrm.org/resourcesandtools/tools-and-samples/hr-qa/pages/what-might-be-considered-reasonable-suspicion-for-drug-testing.aspx