Marijuana Testing: A Guide for Testing Your Employees and Candidates

Past and Current state of Marijuana Testing

Medical and adult recreational marijuana use is becoming more and more socially accepted and states are legalizing it at a frenzied pace. However, at the federal level, marijuana is still listed as a Schedule I drug under the Controlled Substances Act meaning that it is considered to have no currently accepted medical use and a high potential for abuse.

While marijuana is federally illegal in the United States, the Department of Justice has typically chosen not to go after those who possess and distribute marijuana in compliance with state laws. Due to this, marijuana regulations operate in two separate spaces. It is legal and illegal at the same time. This divide in regulations makes workplace drug testing an ever changing, and oftentimes confusing, situation.

Overall positivity rates in drug testing are being driven by marijuana usage. The national average has risen 44.0% Based on an annual volume of 50,000 drug tests, nine industries have been found to have had year over year increases in marijuana positivity rates.

When deciding on a drug testing policy for your employees, there are two main considerations: what is required by law and what kind of employer do we want to be?

What is required by law?

First and foremost, employers should be familiar with the laws in their state. All but three states have state regulated cannabis programs in some capacity. There are some places where it has been completely decriminalized, other places allow only medical use, and some cities, such as New York City and Philadelphia, have put rules in place that forbid marijuana testing during the pre-employment process. New York State recently ruled that employers are prohibited from discriminating against employees who lawfully use cannabis outside of work. 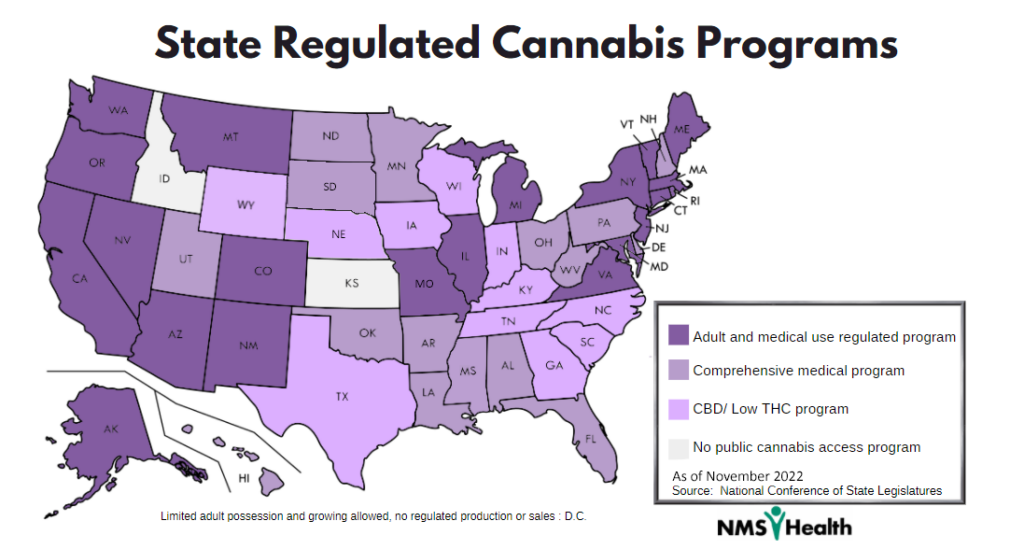 Generally speaking, if a state has recreational laws, it also has medical laws. In states where recreational use is permitted, individuals can obtain cannabis if they are of age to purchase it.

17 states have laws regarding Cannabidiol (CBD) and Low THC products. CBD is an active compound found in the cannabis plant, which does not have the same psychoactive properties as THC but is derived from the marijuana plant.

By law CBD products can contain up to 0.3% THC. While CBD is a chemical component of cannabis, 100% pure CBD will not be confused with THC or it’s metabolites on a drug screen. The production CBD/Low THC products, however, is not federally monitored, and based on some statistics as many as 84% of CBD products are mislabeled. If the product has residual THC present, it will be metabolized and could present as a positive result based on dosage and usage.

For those who have a national workforce, things can be trickier. You must meet obligations for each state that you have employees in. Treatment must be consistent across your workforce. Each employee, regardless of location, must receive equal treatment and accommodation.

Currently, 17 states have documented language in their regulations to provide employment protections for medical marijuana use, 15 states explicitly have no employee protections, and 7 states have regulations and case law which are silent regarding the need to accommodate. In the case of states with unclear protections it then becomes the burden of the employer to weigh the risk of legal action versus the risk of employment. 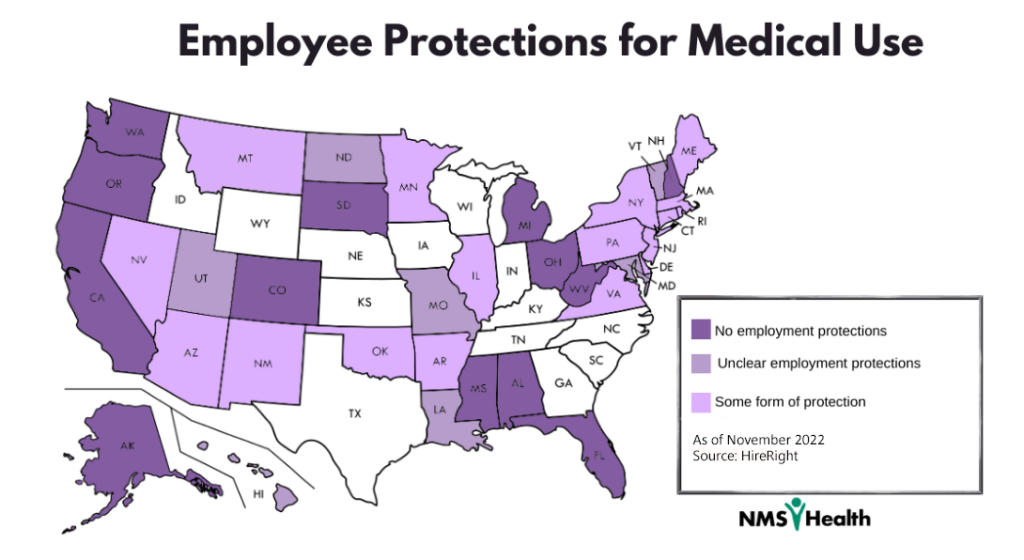 Safety sensitive is not an industry term, it is a defined term. Employers should not assume what safety sensitivity means in regard to state regulations. Only a few jurisdictions have defined the term safety-sensitive, so it is best practice to review any regulations in the states in which you operate.

Some examples of safety sensitive positions are:

In the current economic environment, many employers outside of safety-sensitive industries are taking marijuana out of their drug-screening protocols. By refusing to hire those who test positive, it could create potential staffing problems particularly in areas where cannabis has been decriminalized.

Recently Amazon, the second largest private employer in the country, announced that it would no longer be testing employees for marijuana for those in positions that are not regulated by the U.S. Department of Transportation. The company said it would treat marijuana use the same as alcohol use.

According to Quest Diagnostics, employers’ general workforce testing between 2015-2020 showed a decrease in THC inclusion panel ordering for non-recreational/medical by 3.4%. THC inclusion panels in medical marijuana regulated states declined 4.2% and THC inclusion panels for recreational states declined 8.5%. Recent data also shows that from March to December 2021, the percentage of tests conducted where THC was removed from the panel almost doubled! In March 2021, 6.31% of the testing volume were tests without THC, whereas in December 2021, it was 11.01%. With large standing companies committing to reforming their drug testing policies, this may be a sign of trends to come.

As part of the pre-employment process, drug screening can currently continue without testing for marijuana. Some common urine test panels are:

There is not a legal or scientifically agreed upon definition for impairment and as such, there is no standard workplace drug test to provide insight as to whether or not an employee is impaired. However, “under the influence” is a policy term which can be included within your own company’s handbook. Your handbook can use signs and symptoms of marijuana use, certain behaviors, as well as positive drug test results as “proof of under the influence” as long as it abides by the state regulations in which you operate.

You can also decide to not test for marijuana metabolites during drug screenings. If you do forgo testing for marijuana and accommodate employee’s use of cannabis outside of work, it should be made clear that impairment at work will not be tolerated. Much like alcohol use, employees are expected to come to work sober.

Companies can test for alcohol after an incident, but that does not work as well with marijuana usage. There is no standard limit recognized as the intoxication limit for THC. It can take a minimum of a few hours for metabolites to become present in the employee’s system. Additionally, marijuana’s longevity in the employee system is variable – it depends on their metabolization, if they are a frequent or infrequent user, etc.

According to Quest’s general workforce data, between 2012 and 2020 post accident positivity rates jumped 166.7%. While correlation does not necessarily mean causation, the data is quite concerning. Testing employees’ post-accident is legal in all states, but laws of each state must be met. If you have employees in multiple states, you must comply with all of them.

According to the National Safety Council, the industries with the largest number of workplace injuries are:

Typically, after an accident, an employee will be sent for a post-accident screening. If you have DOT employees, it must follow the federally mandated guidelines. For example, the employee who tested positive in their post-accident test must be removed from any safety sensitive duties. Depending on the circumstances, they will then be evaluated by a substance abuse professional. If they’re not terminated, they’re going to go through some type of a treatment program. Once the substance abuse program has been completed, they can then undergo a return to duty drug screen. For those general workforce employees, a similar policy can also be put in place, as long as it aligns with the regulations of the states you operate in.

It is also important to create an environment in which employees are not afraid of retaliation at work and will come forward to report accidents. Your policy needs to reflect that if an employee is involved in a post-accident drug screen, that there are options available to them beyond punishment or termination based on the findings of the accident and that they may have the opportunity to discuss what led to the accident.

What kind of employer do you want to be?

Different industries may answer this question differently. Those who run a manufacturing company may approach the situation much differently than a company whose employees work in cubicles all day. Additionally, some sectors have employees who must abide by federal regulations that mandate marijuana testing. Workers such as those in the Department of Transportation must be screened for drug and alcohol use. Even in the case that a DOT or Federal Worker is eligible for medical marijuana in their state, it is NOT considered a medical exemption for their position.

What does NMS recommend