An analysis of workforce drug positivity rates for 2021 are out and the numbers aren’t looking good. Quest Diagnostics’ study is based on more 11 million de-identified urine, hair and oral fluid drug specimens collected between January and December 2021. The overall positivity rate results showed that the United States workforce has reached its highest rate year in over 20 years, was up more than 30% in the combined U.S. workforce from it’s all time low in 2010-2012. While the overall positivity rate rose only 1.8% since the previous year, 2020, they were 12% higher than 2017 and have risen steadily each year, over the past five years.

The Quest Diagnostics Drug Testing Index, which is conducted and published yearly, is a strong tool which provides trend insights on workforce drug use based on positivity rates. Their analysis includes a nationally representative sample size, longitudinal monitoring and a testing population that is generally reflective of the national combined workforce.

The combined workforce is comprised of the general workforce, such as company policy testing by private sector employers as well as the safety-sensitive, federally mandated workforce, which includes those in transportation and nuclear power sectors. 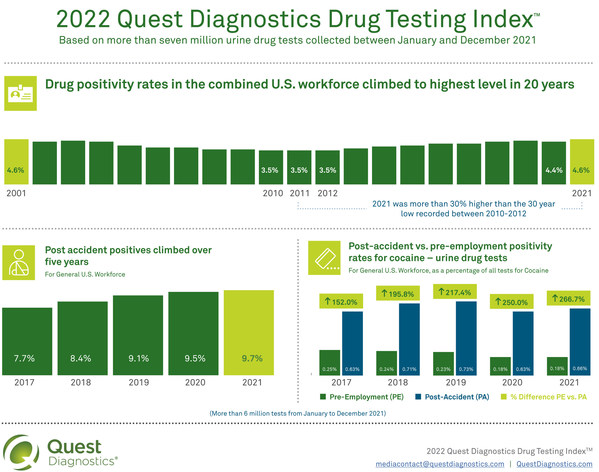 In a statement, Barry Sample, Ph.D., Senior Science Consultant for Quest Diagnostics said, “Our Drug Testing Index reveals several notable trends, such as increased drug positivity rates in the safety-sensitive workforce, including those performing public safety and national security jobs, as well as higher rates of positivity in individuals tested after on-the-job accidents.”

Pre-employment urine drug testing positivity rates have increased 9.5% since 2017 for safety-sensitive employees while post-accident positivity increased 41.9%. Post-accident positivity for marijuana, cocaine, opiates like hydrocodone and hydromorphone and oxycodones like oxycodone and oxymorphone were 63.6%, 119%, 257.1%, and 194.1% higher, respectively, as compared to pre-employment tests. As marijuana use is not federally legal, certain employers are required to test employees for the substance and there are no employment protections offered to those safety-sensitive employees. Dr. Sample stated, “if they use marijuana, they can still lose their jobs. People who use drugs during working hours or before work can still be impaired and dangerous to co-workers, the general public and themselves."

The Accommodation and Food Service industry has the highest positivity rate for marijuana at 7.5% which is a relative increase of 11.3% over the past five years.

"Employers are wrestling with significant recruitment and retention challenges as well as with maintaining safe and engaging work environments that foster positive mental and physical wellbeing," said Keith Ward, General Manager, Quest Diagnostics Employer Solutions, in a statement. "Our Drug Testing Index data raises important questions about what it means to be an employer committed to employee health and safety. Eager to attract talent, employers may be tempted to lower their standards. In the process, they raise the specter of more drug-related impairment and worksite accidents that put other employees and the general public in harms' way."

NMS Health's service is designed to make the screening process simple and less time consuming for your hiring teams. With a large network of clinic and lab partners, we've got coverage in all 50 states!

Click here to learn more and to get started today!