Regulated drug testing is defined by having certain regulations designated by the government. Typically, individuals who need this kind of testing have safety-sensitive occupations due to their potential influence on public safety. Most of the regulated drug testing in the United States falls under Department of Transportation guidelines for agencies that fall under the DOT such as:

Under the Department of Transportation, each body has various regulations about how employees in their specific part of the transportation industry should be tested. The Department of Transportation’s rule, 49 CFR Part 40, describes required procedures for conducting workplace drug and alcohol testing for the Federally regulated transportation industry. For the Federal Motor Carrier Safety Administration (FMCSA), DOT-regulated testing should only be administered to drivers in one of the following categories:

What is a non-regulated test?

A non-regulated test is a drug test completed by any non-federal, private, or public employer. This type of drug test does not have federal regulations. Employers are free to choose the specimen type, time frames, and drug panels that suit their workplace drug policy.

Who is responsible for testing accurately?

There is a dual responsibility shared by the employer and the specimen collection site to ensure that the correct drug testing procedures are followed. DOT employers are required to include the driver’s CDL or CLP on the chain of custody form (CCF) and to monitor that driver’s are not given federal CCF for non-DOT testing. Collection site managers must ensure that all collectors are properly trained on the nuances of DOT-regulated testing. Collectors must identify the correct agency, collect, and verify CDL or CLP information, and contact employers if drivers indicate that they do not hold CDL or CLP.

Collectors should follow the procedures outlined below to verify if regulated or non-DOT tests should be administered to FMCSA-regulated drivers: 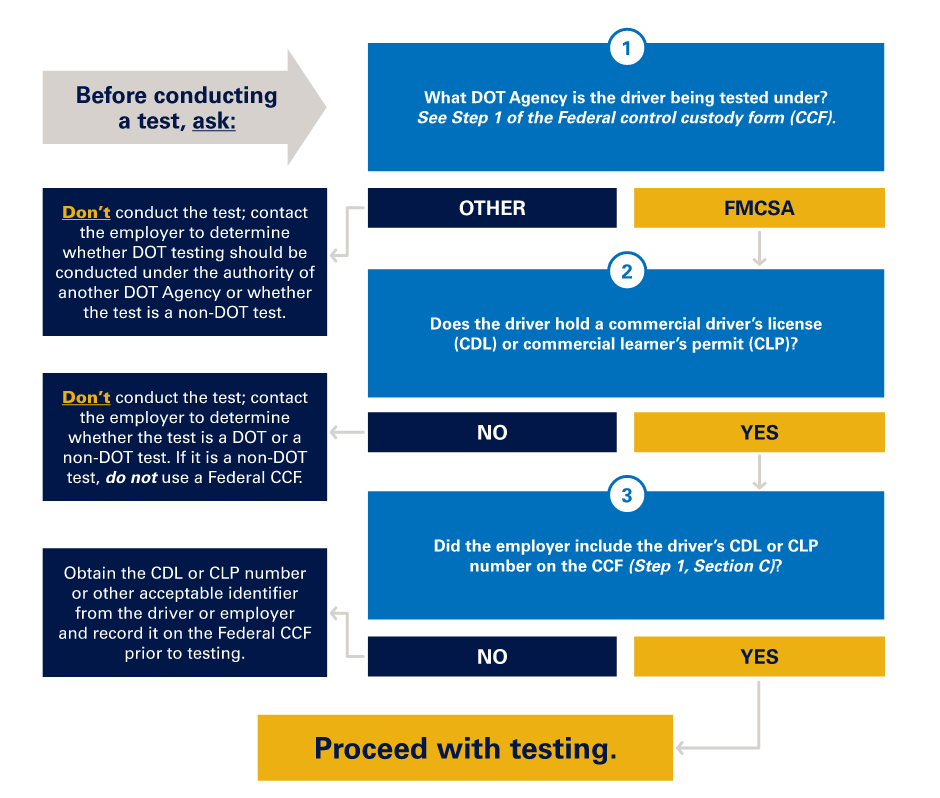 It is important that the appropriate tests are administered to the employee or candidate to avoid confusion and delays. “Administering Federal drug tests to anyone other than these groups under FMCSA regulations creates an unnecessary administrative burden on everyone in the Federal drug testing arena including, employers, drivers, medical review officers, third party administrators, and Federal staff.”